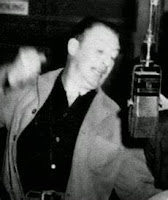 Brace Beemer became the third radio voice of the Lone Ranger on April 18, 1941, and remained so until the series' last new episode on September 3, 1954. During the 13 years that Beemer played the title character, he was required by contract to restrict his radio acting to that one role until the program left the air. BEEMER BIO AT WIKIPEDIA The experienced and popular Western film actor, Clayton Moore, was chosen to take over the role for the television series. Although Beemer had the right voice and had made many public appearances as the Ranger, he had no experience as a film actor.