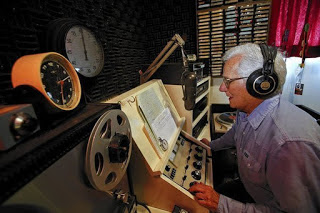 A veteran Los Angeles radio broadcaster and longtime host of the syndicated program "The Swingin' Years", a "Best of" radio show for the "big band" era in music, which lasted from 1935 to 1955. Cecil landed his first radio job at KVEC in San Luis Obispo, California. By December, he had been called to active duty by the Navy. Cecil was accepted for the Navy's V-5 pilot training program, flying for Grumman. When the war ended, Chuck was serving in a replacement squad waiting for his first combat assignment which never came. After the war, Chuck went back to radio. where he found a job at KFLW in Klamath Falls, Oregon. While working as an announcer for "Baldy's Band", a popular orchestra in Southern Oregon, Cecil met his future bride, Edna Brown. She had been working as the band's vocalist. The couple wed in 1947 and have four children and 15 grandchildren. Cecil was hired by Los Angeles radio station KFI in 1952, where he remained for the next 21 years until 1973, when KFI made a format change, causing Cecil to leave the station. Cecil later spent most of the 1970s and 80s working at radio stations KGIL-AM and KPRZ, both in Los Angeles. While working at KFI, Cecil pitched the idea of a Big Band oriented radio show to the station's management; they agreed. So in June 1956, "The Swingin' Years" went on the air for the first time.

The concept was simple: "The Swingin' Years" perpetuates the memory of swing music, popularized by such acts as Glenn Miller, Benny Goodman and Duke Ellington. The program focuses primarily on Swing, but also included many of the popular ballads of the era that topped the record charts from 1935 to 1955, that Cecil calls "The Swingin' Years". The music played on the program originally came from KFI's vast record library, as well as from Cecil's personal collection of 40,000+ 78 rpm records. As the show progressed, Cecil included audio clips of his interviews with some of the brightest stars of the big band era. "The Swingin' Years" began as a local Los Angeles show in 1956, but by 1973, Cecil began syndicating the program through American Radio Programs, Incorporated. During its peak, the show aired on hundreds of radio stations across the United States, in Europe and on the Armed Forces Radio Network. WIKIPEDIA